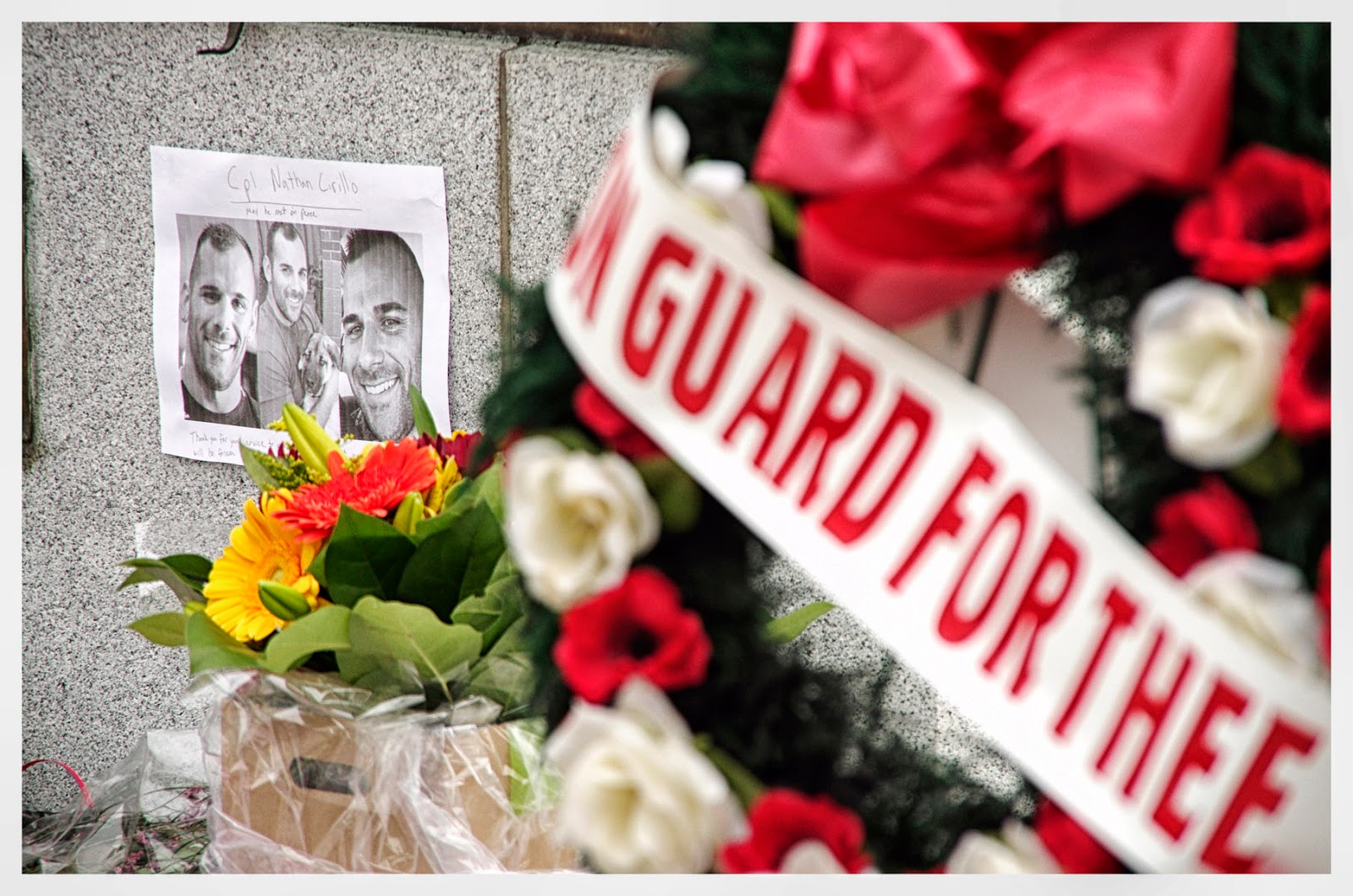 An unsettling week.  The killing of two Canadian soldiers on Canadian soil prompted several impromptu memorials across the country.  One soldier in Quebec was struck in a hit-and-run incident, involving a possible Islamic radical. The radical driver was shot and killed by police. Another soldier was shot and killed while standing on guard at the Unknown Soldier memorial in Ottawa.  The shooter was killed while storming the halls of Parliament by the Sargent of Arms. It's not sure if he was a radical (Prime Minister Harper says yes, which would justify his call to war) or emotionally disturbed (as per the shooter's mother).

An impromptu service was held in Calgary in Memorial Park on Saturday for Cpl. Nathan Cirillo, the young soldier shot in Ottawa.  Merle, the organizer, was surprised at the number of people who turned out (about two dozen). There were soldiers in uniform, a local Islamic leader, and Rob Anders (a controversial Member of Parliament).  I wasn't surprised at the response. People draped in flags sang O Canada, listened to speeches, and signed a flag placed on the cenotaph.  I was surprised to see the often missing Anders.  After listening to his cringe-worthy juvenile speech -- "bad guys have guns, good guys should have guns, too" -- I was wishing he was still Missing In Action. 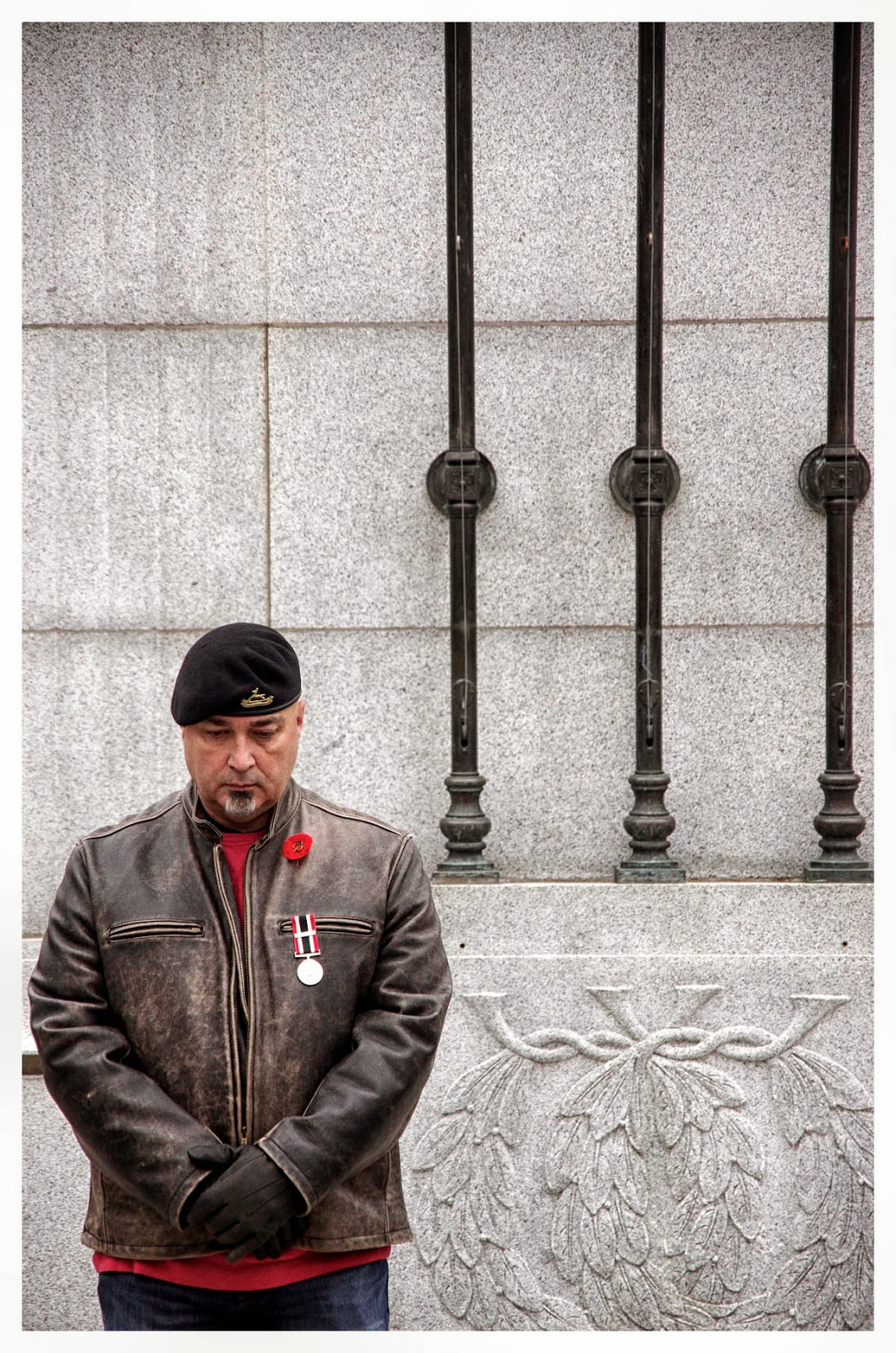 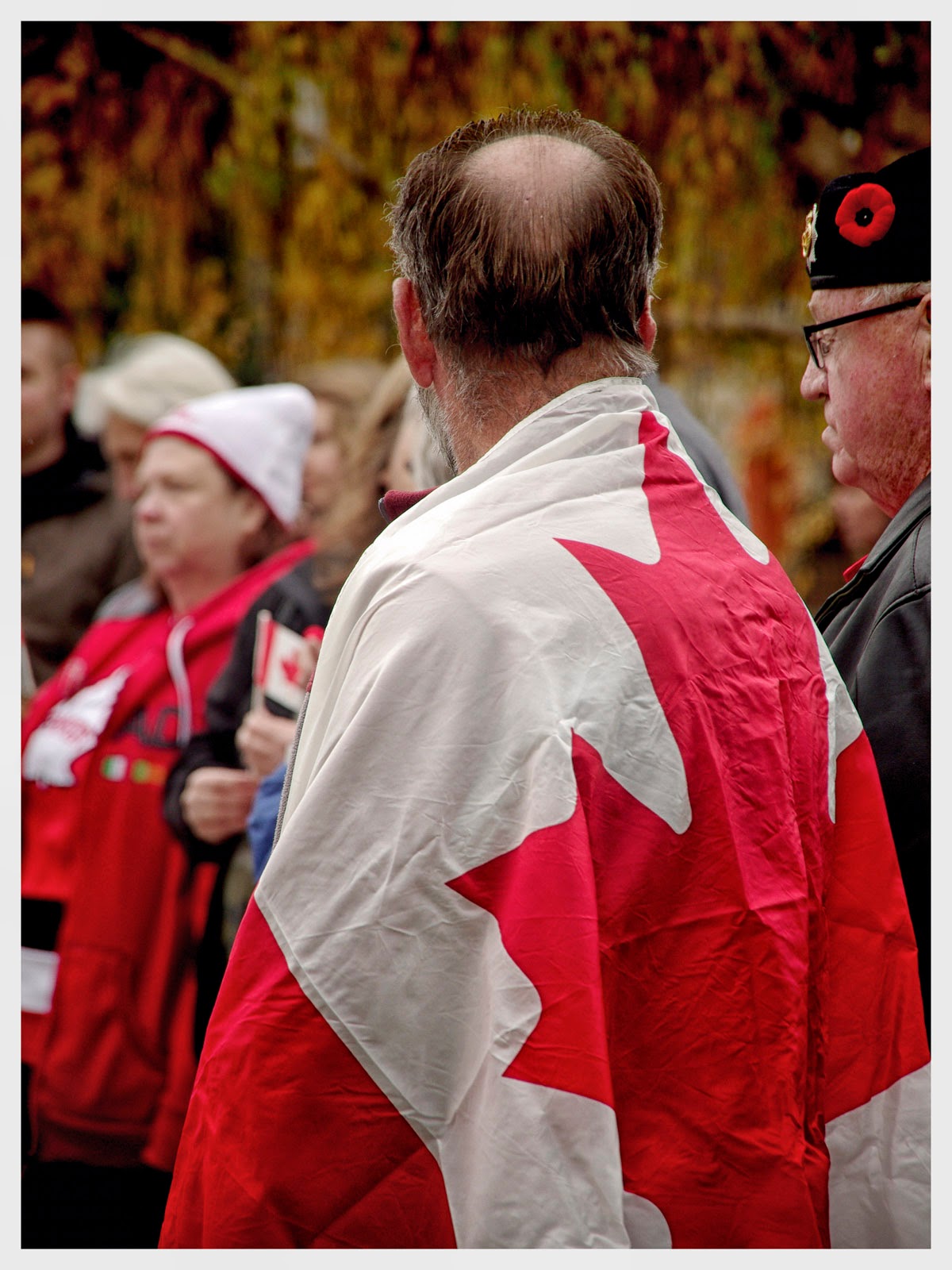 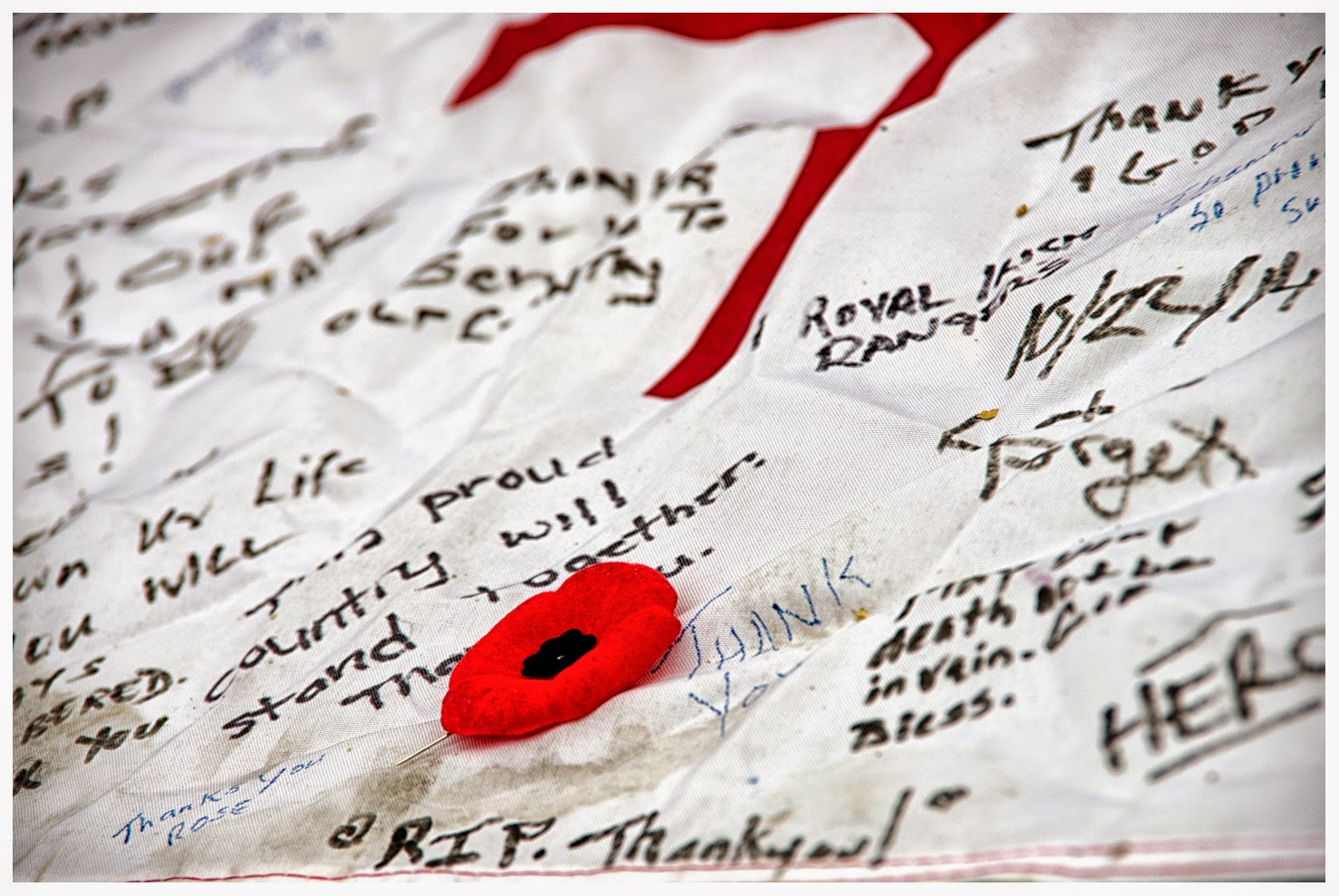 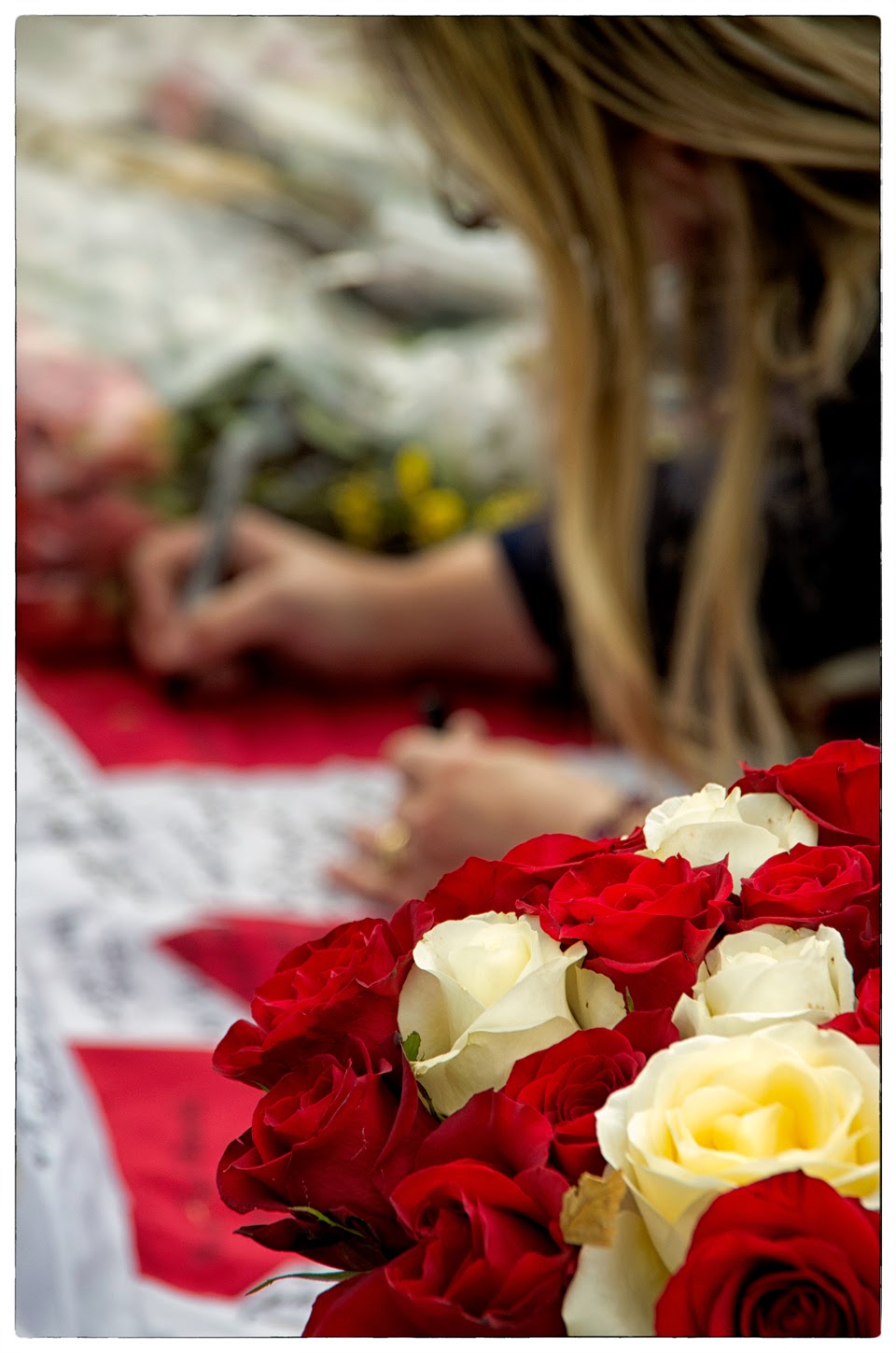 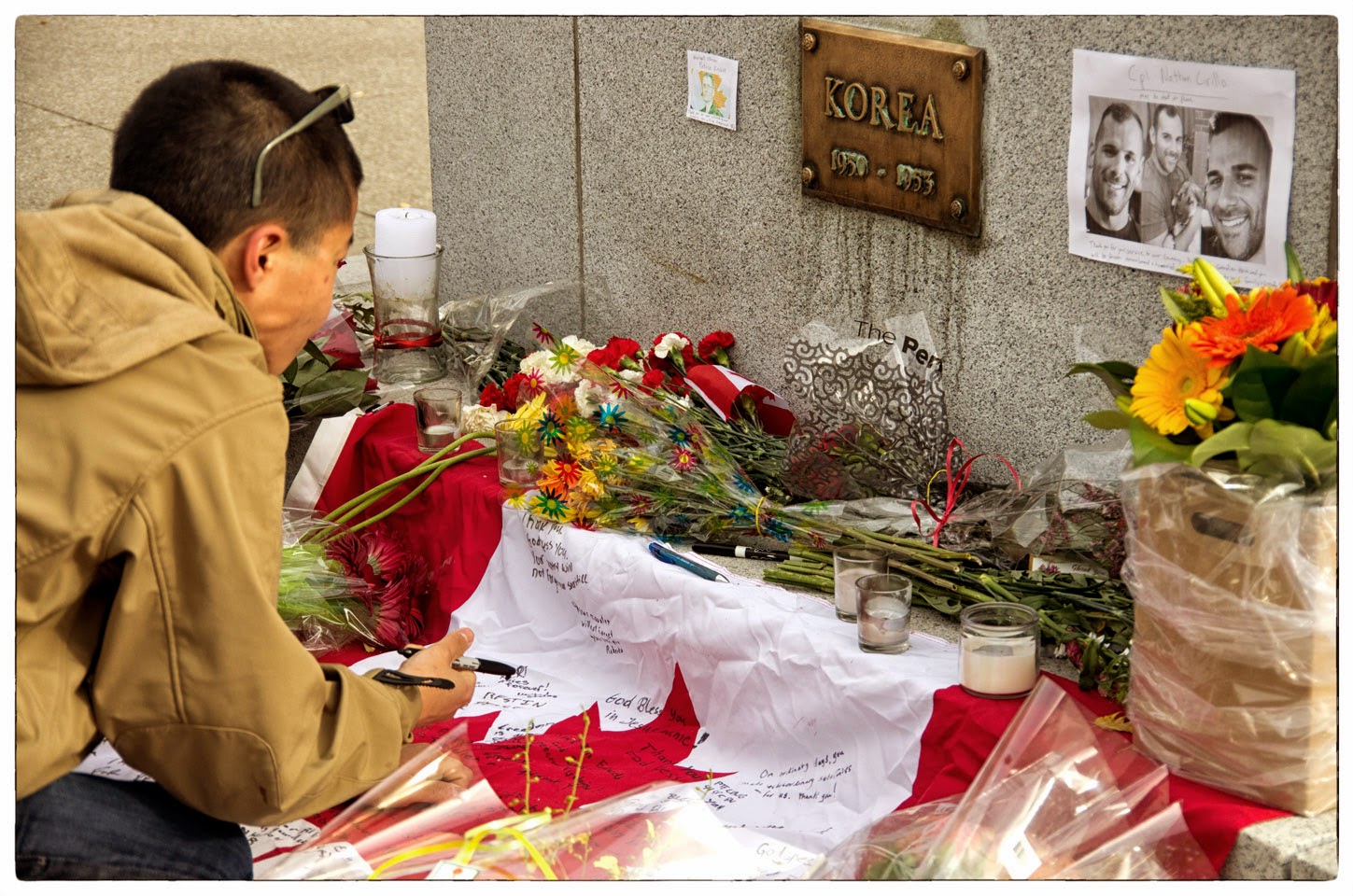 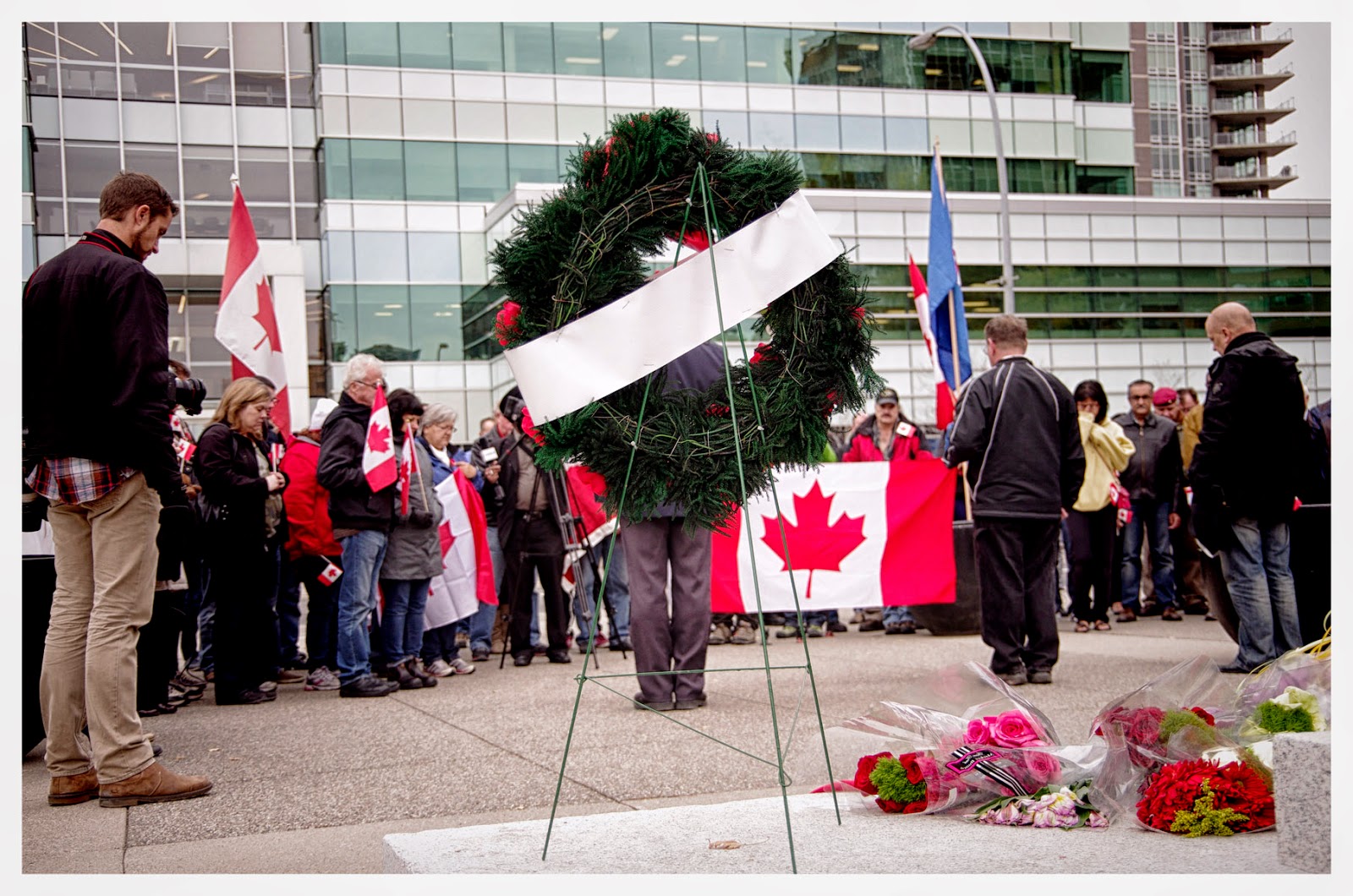 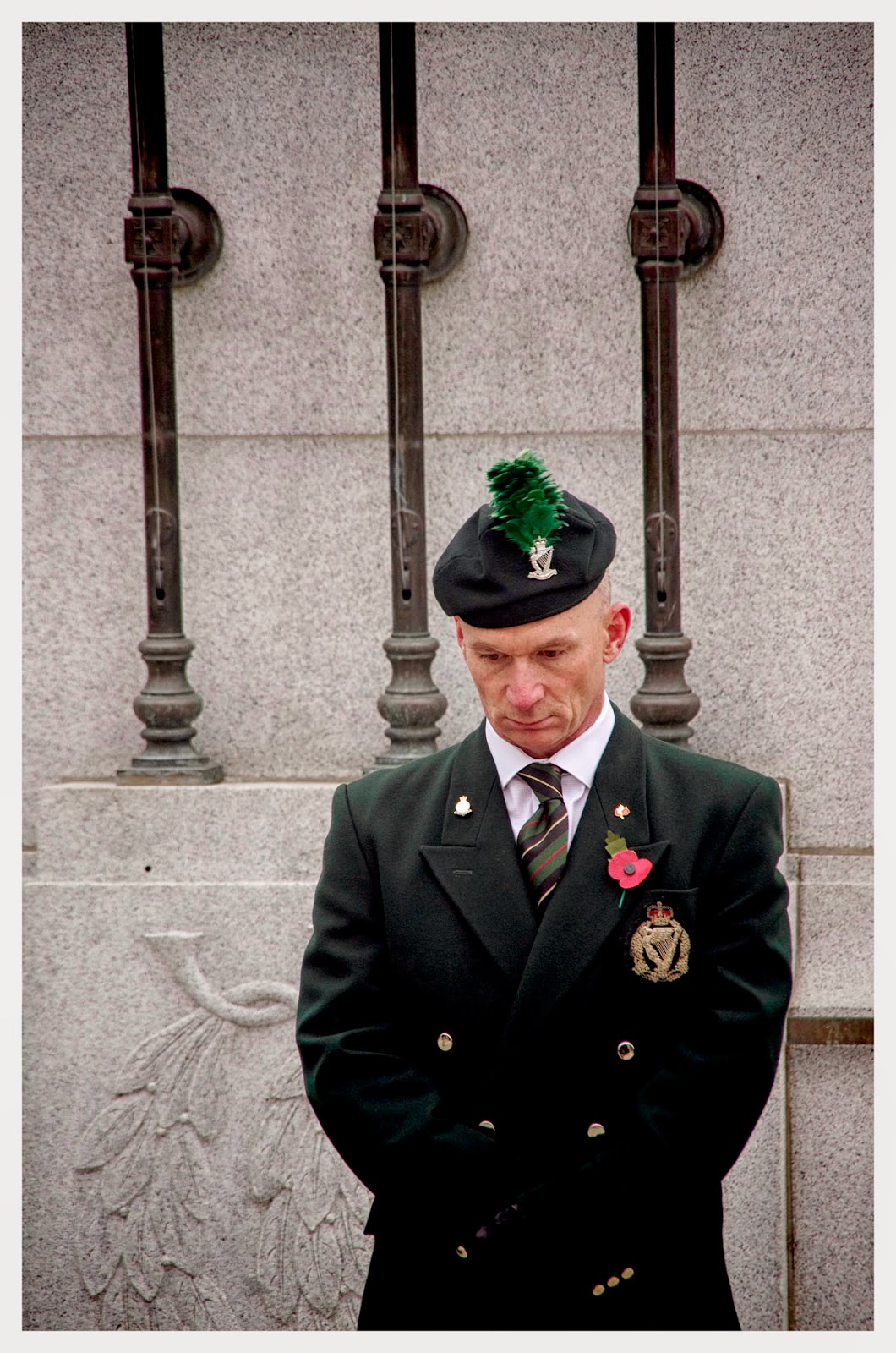 After lunch I met up with a smaller bunch of local activists holding a peace rally on the corner of 10th Street and Memorial Drive.  When I told one of them about the memorial he was also shocked that Anders was there. Not because of this often being MIA, but because Anders has a reputation for being non-supportive of military veterans. 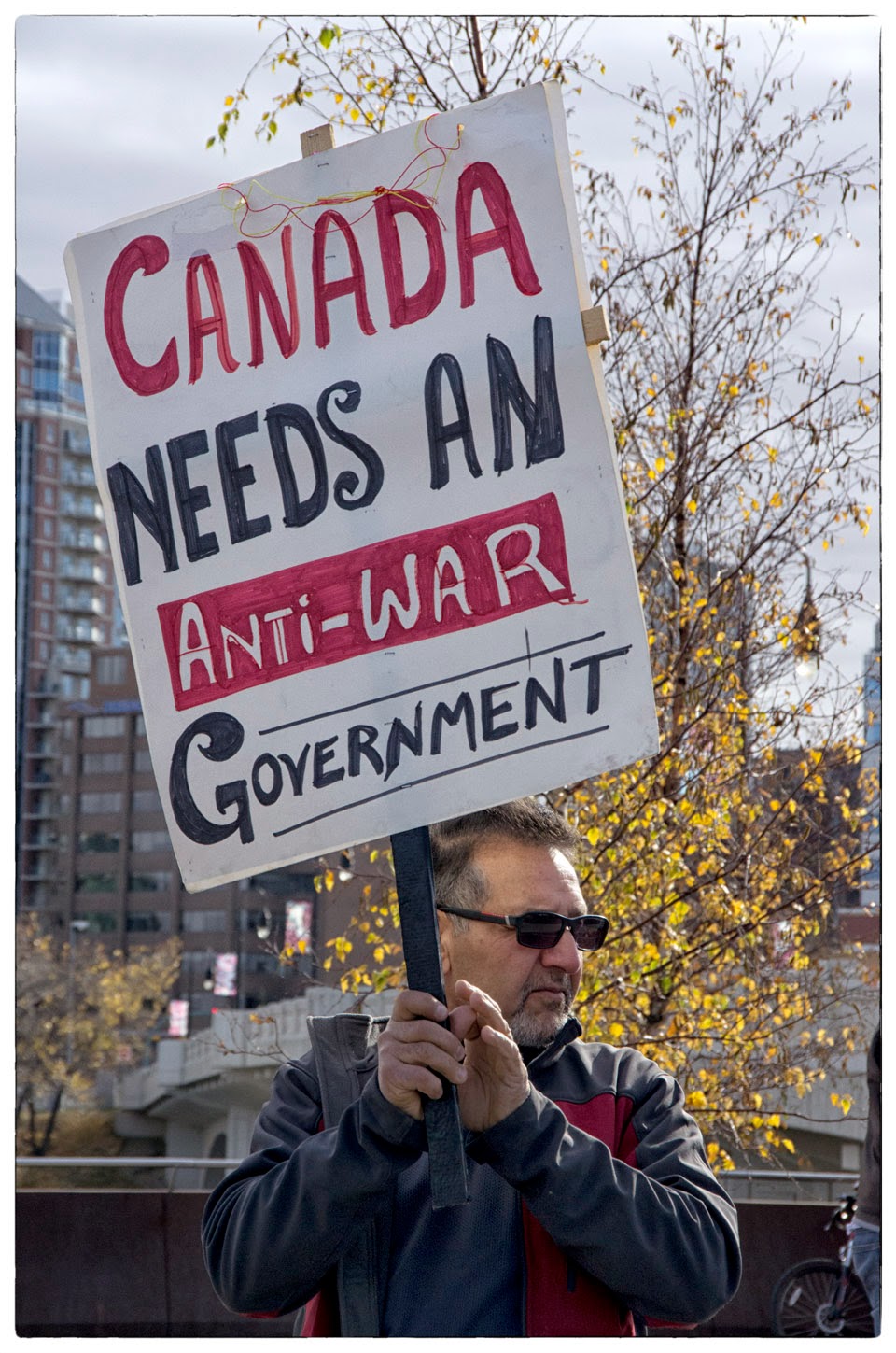 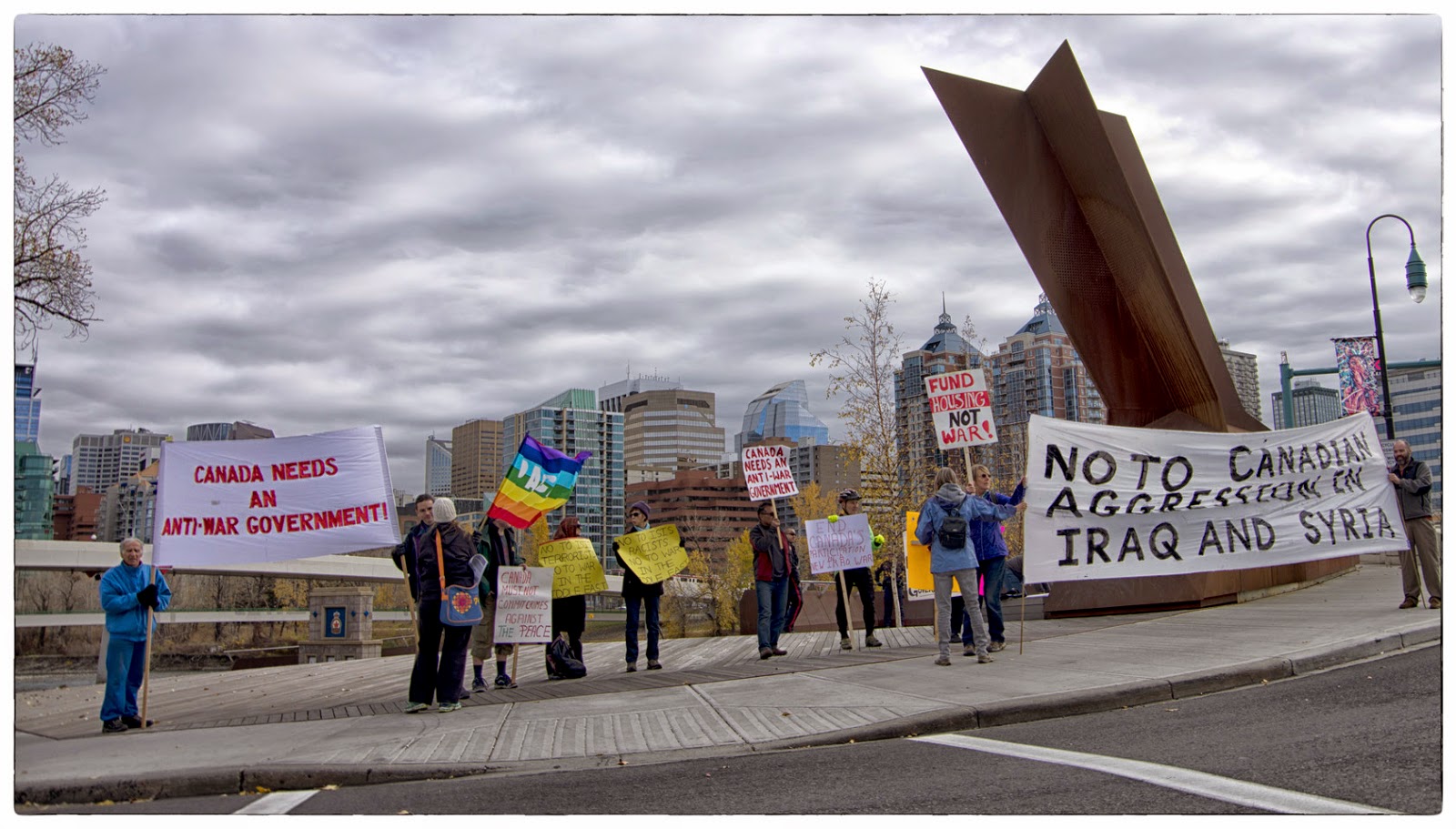 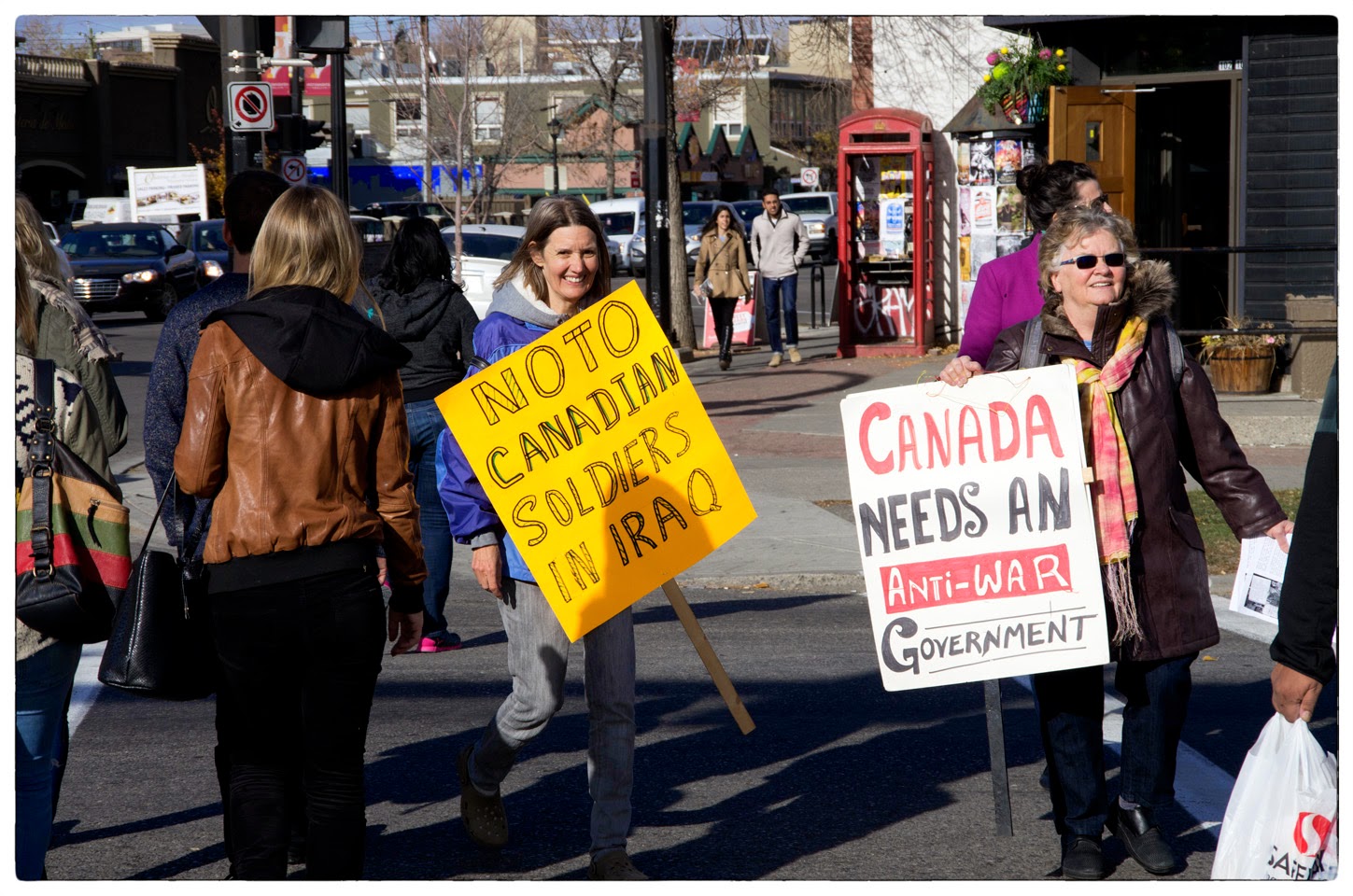 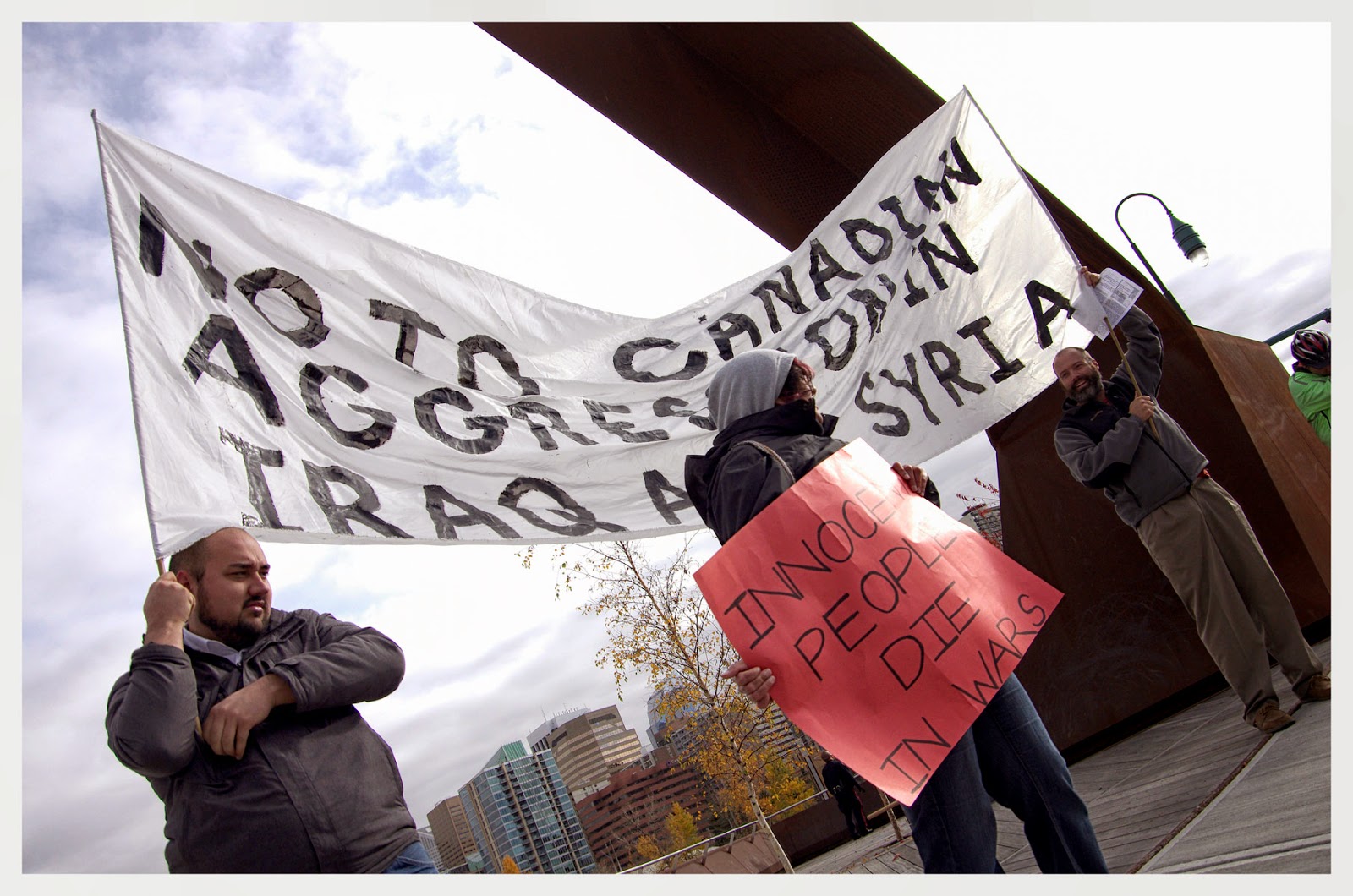 An interesting side note.  The National Post ran a story about a guy who created a candid-camera-style "social experiment" video where an actor makes racist comments against another actor dressed in Islamic clothes. They were trying to judge how Canadians felt about the shootings in Ottawa.  The "racist" actor wound up getting punched in the nose.


Saturday evening Len, a photographer friend, and I covered an Indonesian Gala.  This was my second time assisting Len with photographing this gala and was familiar with most of the dances. This year they also brought in dancers from Los Angeles and Paris, France and had a young band performing Indonesian pop tunes. Last year it was held in a community hall.  This year it was at the Chinese Cultural Centre, which presented some challenges.  Like the full size stage, meaning the performers were above me most of the time, and the lighting (as usual).  I used mostly the Canon 50D (sometimes with on-camera flash) and a little bit of the Pentax K-5.  I think the K-5 is reaching its lifespan.  At one point the white balance suddenly turned blue then reverted back to AWB. Good thing the K-3 is coming down in price.

Posted by Wanda Martin at Friday, October 31, 2014 No comments: Links to this post

Life's a little squished for blog time lately. Last Saturday I gave a photo club talk that went really well.  Then on the same day I tried to fit in the Zombie Walk and a Monsanto protest (before I had to work), and found a surprise (to me) Famous Five anniversary celebration. I've also been taking some portrait photography courses with varying degrees of success.

The photography talk was for the Calgary Public Library Photography Club.  I spoke about what I do when I shoot events, including a bit about composition, how to get information on local events, and a smattering of background information about the events.  After the gut-full of fluttering Monarch Butterflies subsided, I had a lot of fun.  The best part was engaging participants in conversation!  When I get a moment I'll write out the talk in future blog articles.

Afterwards I tried to catch a little bit of the Zombie Walk.  The walk started at 2:00. I had to be at work by 2:00. I knew timing was going to be tight.  As coincidence would have it, there was also a small gathering of Monsanto protesters at City Hall.  So I took some quick shots of the protesters just before I made my way to Olympic Plaza to, hopefully, catch some early zombies.

The pleasant surprise was finding the Famous Five Foundation having an anniversary celebration of Persons Day near the Famous Five statues.  Persons Day commemorates the day when women were designated persons by the Canadian government and permitted to vote.  There were musicians singing and ladies dressed in period costumes. Apparently they do this every year.  Another event now marked on my calendar! 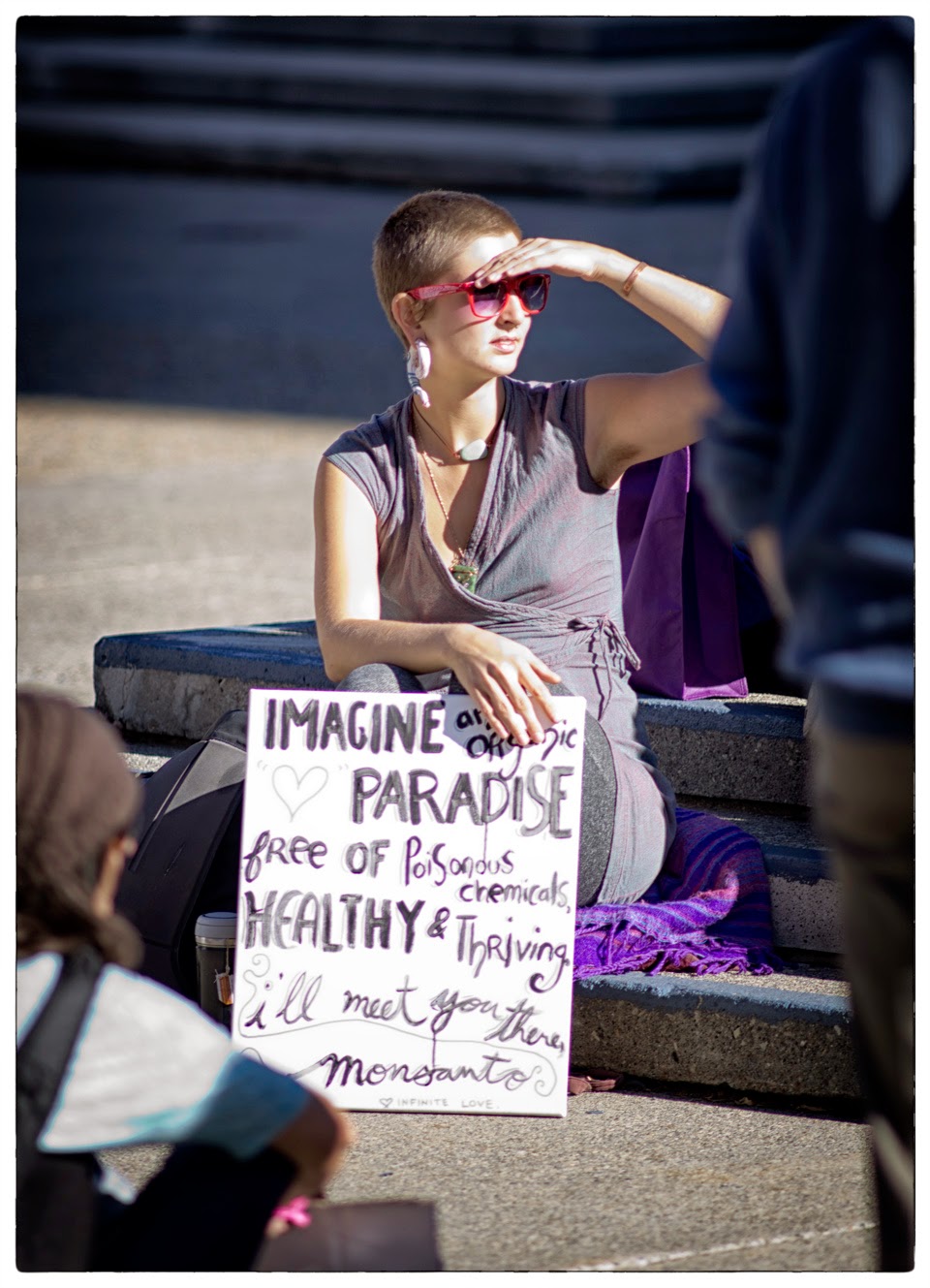 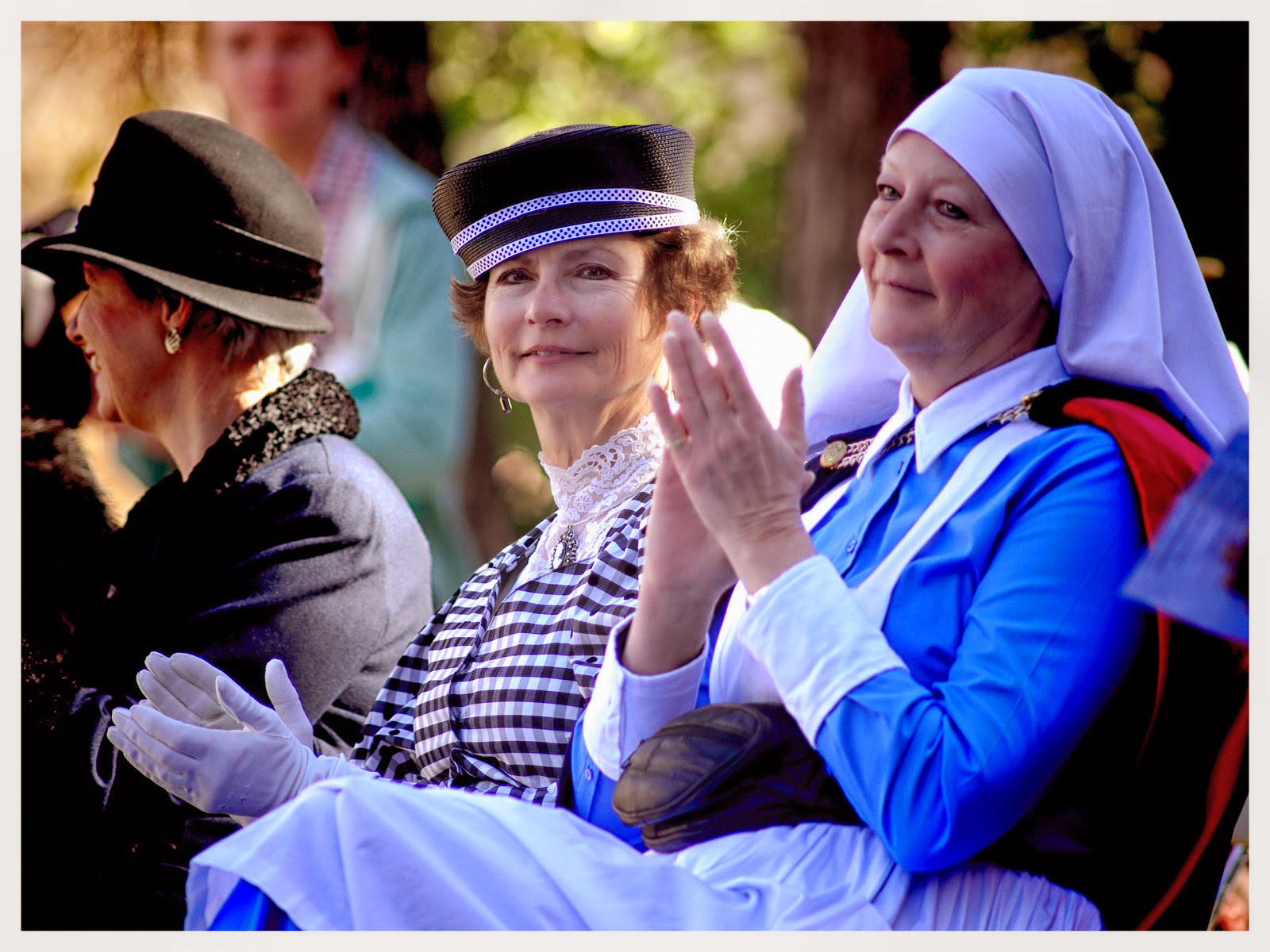 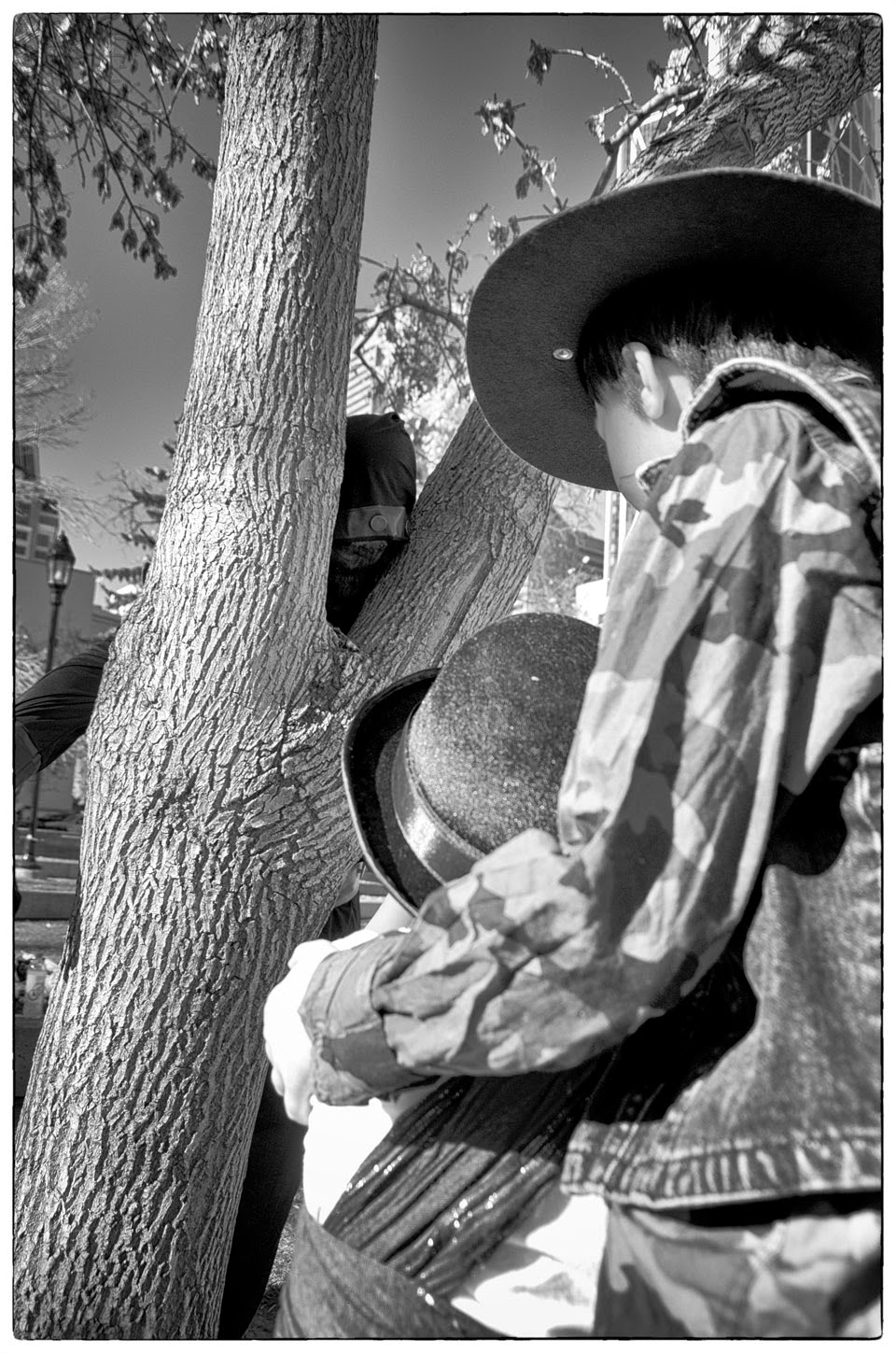 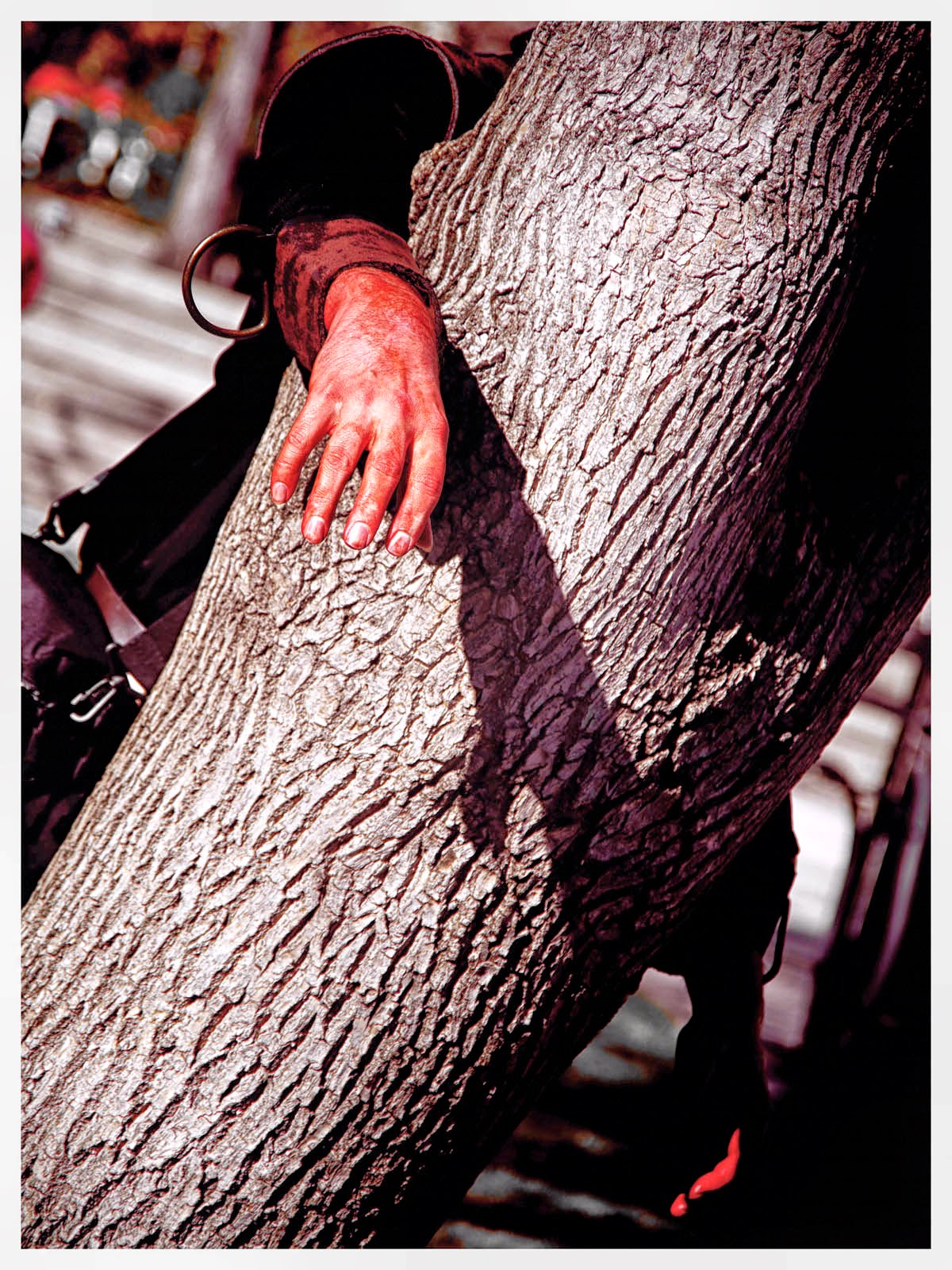 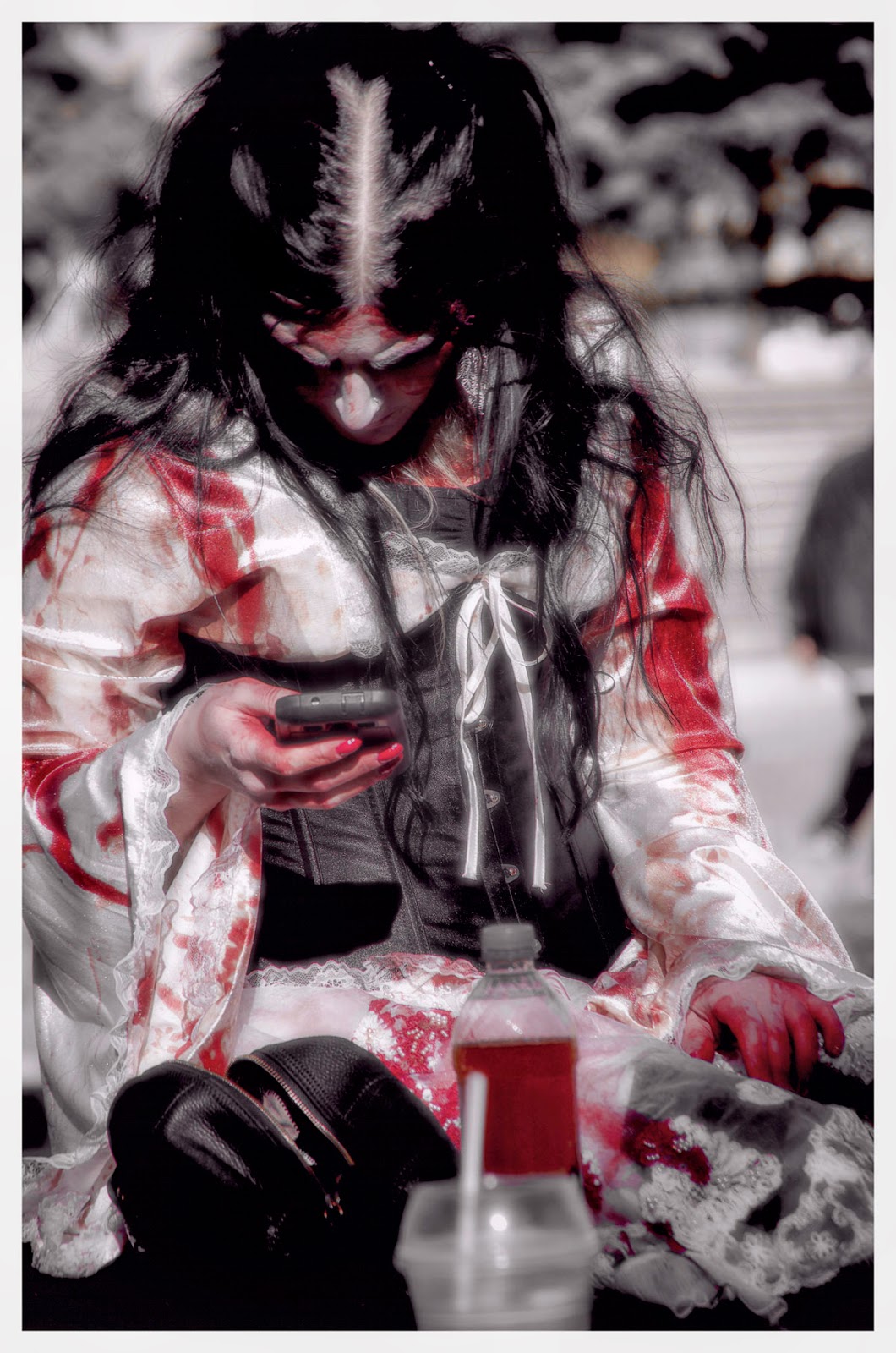 In September I took a one day portrait photography class with a company called Learn Photography Canada.  We spent a day at Heritage Park and it was jammed packed with all kinds of great advice and ideas. The coolest thing I learned was that when you are shooting a group around a table get the people sitting furthest away from you to lean in and then select an aperture number equal to the number of people being photographed.  So eight people would be f-8.  I haven't tried it yet, but the instructor demonstrated and it looked pretty cool.

A couple of weeks ago I started an 8 week portrait photography course through the University of Calgary. So far I'm not sure about the U of C class.  This week the class assignment was to photograph a person while giving them posing directions.  I asked Christina, one of my co-workers, to help out.  Luckily I asked the right person.  I didn't know what to tell her to do and she said she didn't know how to pose, but Christina (who has a lovely dramatic flare) and I both kind of improvised. And we had fun doing it!  These are the unedited shots (teacher's request) that I submitted for the assignment. 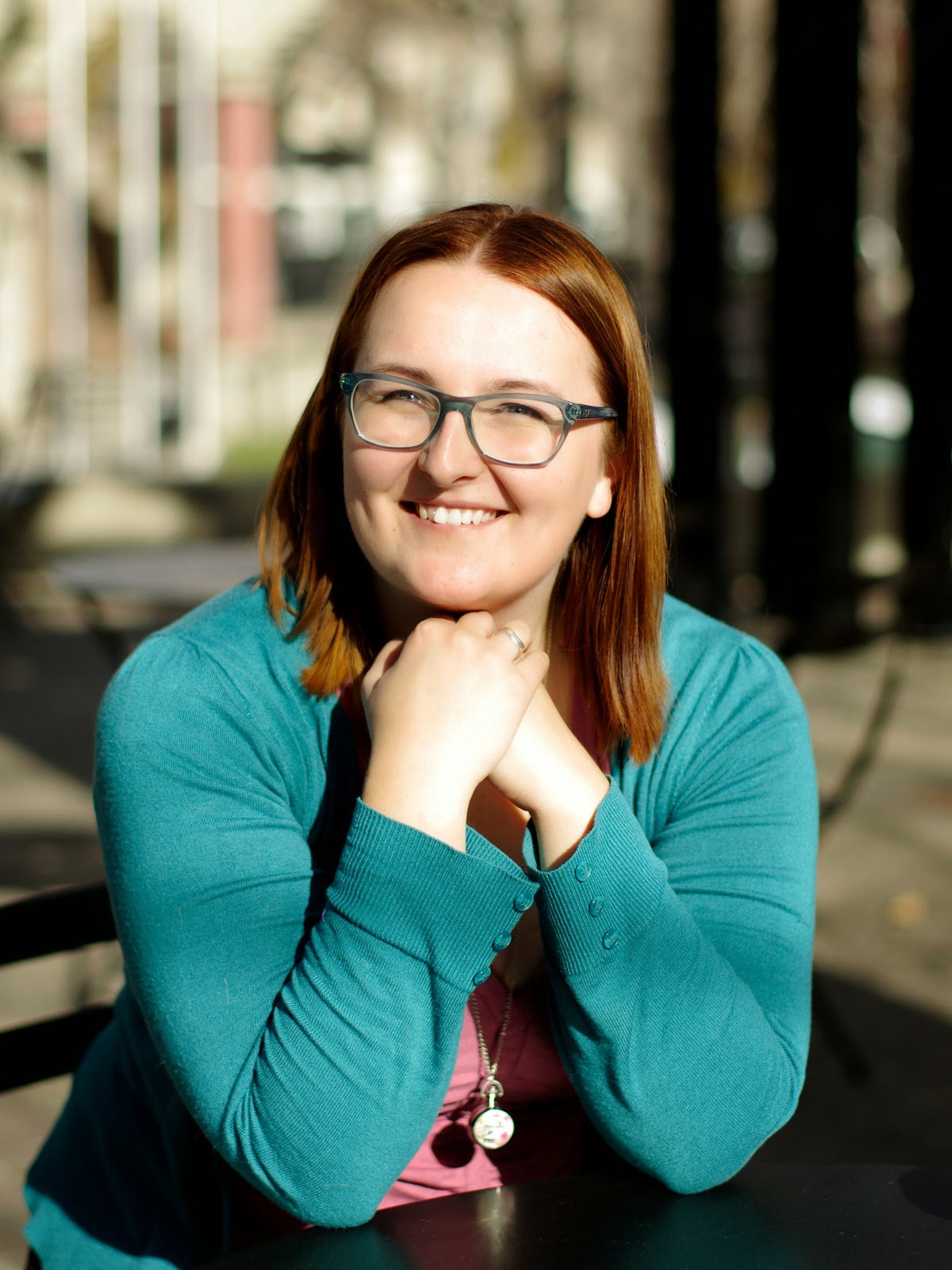 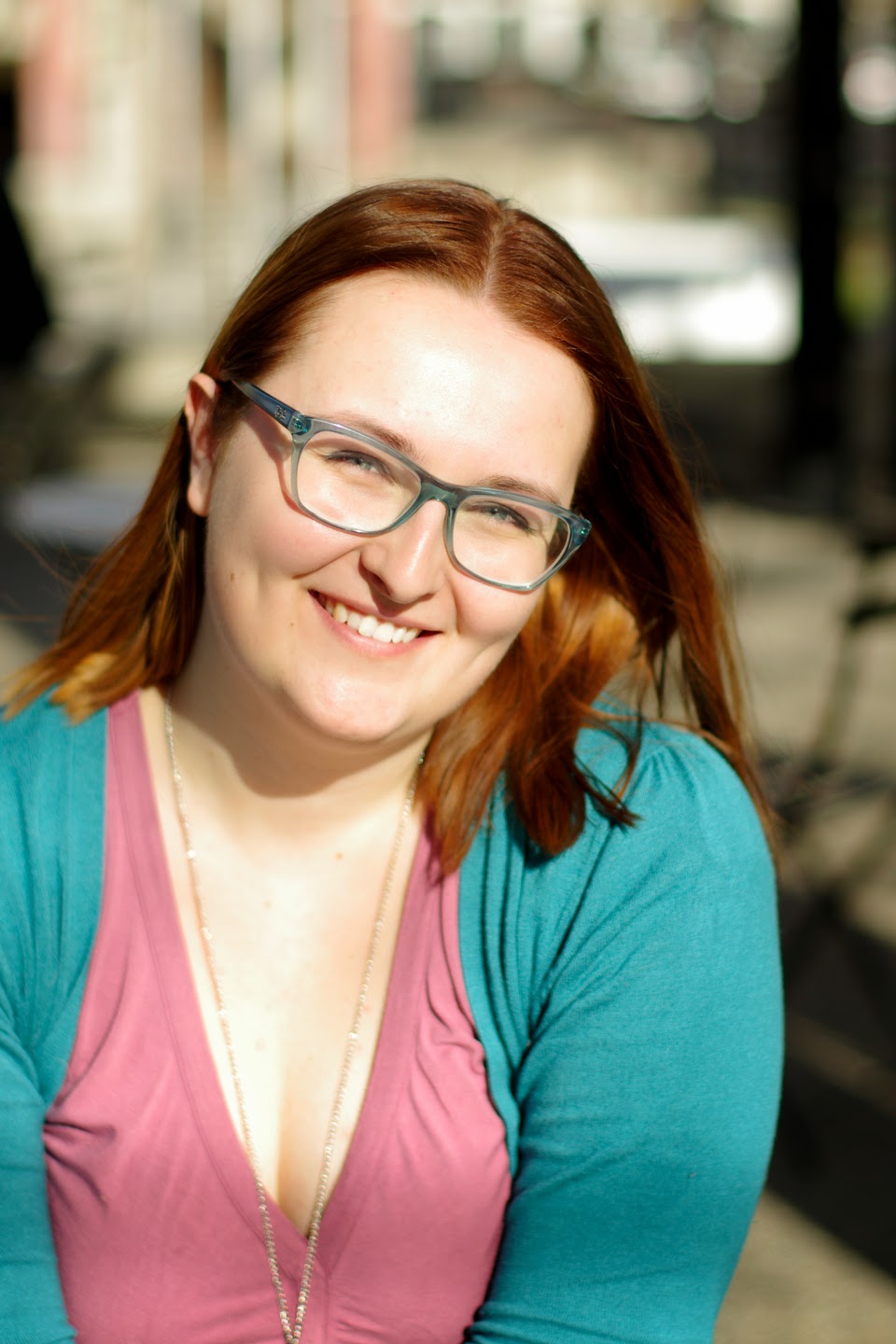 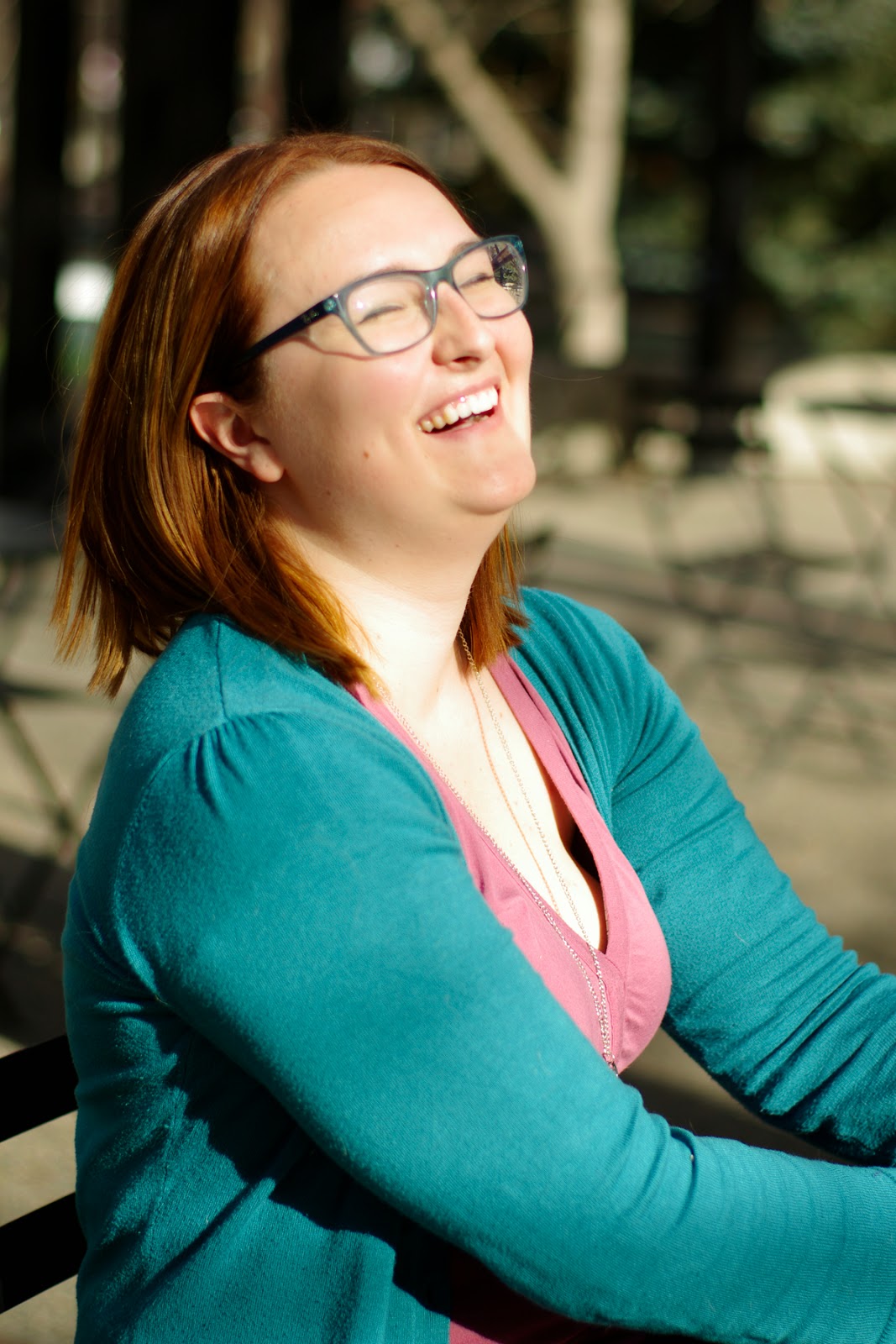 Then something really interesting happened afterwards. While I was sitting near the EPCOR Centre, checking out Christina's photos, an older First Nations fellow asked me to take his picture.  His name was Tom and he was a little messed up. There was the possibility for disaster, but I dove in and took the challenge.

At first he just stood straight and stared at me.  So, I chatted Tom up to get him to relax.  I asked him where he was from and all the places he had been.  Once I got him talking he seemed to forget for a moment that I was there which let me shoot him and all his expressions.  Tom had a wonderfully expressive face. Then at one point, I think it was when he was talking about his life, he got very emotional.  I was clicking away the whole time he was talking and caught him suddenly tearing up.  Quickly I steered the topic to something less painful and continued shooting.  In all I think it took maybe five minutes.  Afterwards we chatted a little bit about a dog/wolf a friend of his has in Regina and the price of food there.  I gave him some money for coffee and thanked him for letting me take his photo. He thanked me for taking the time to talk with him. 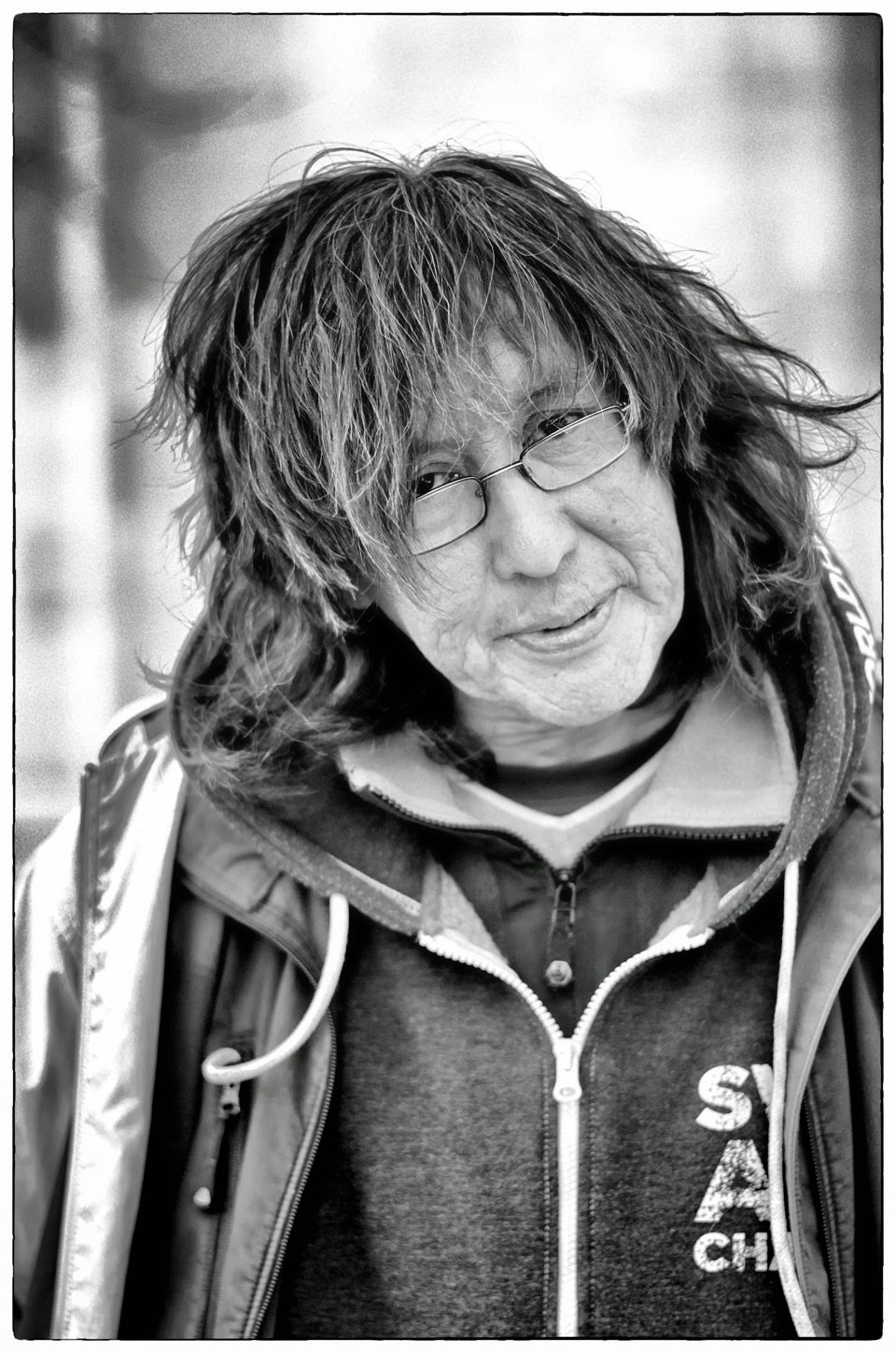 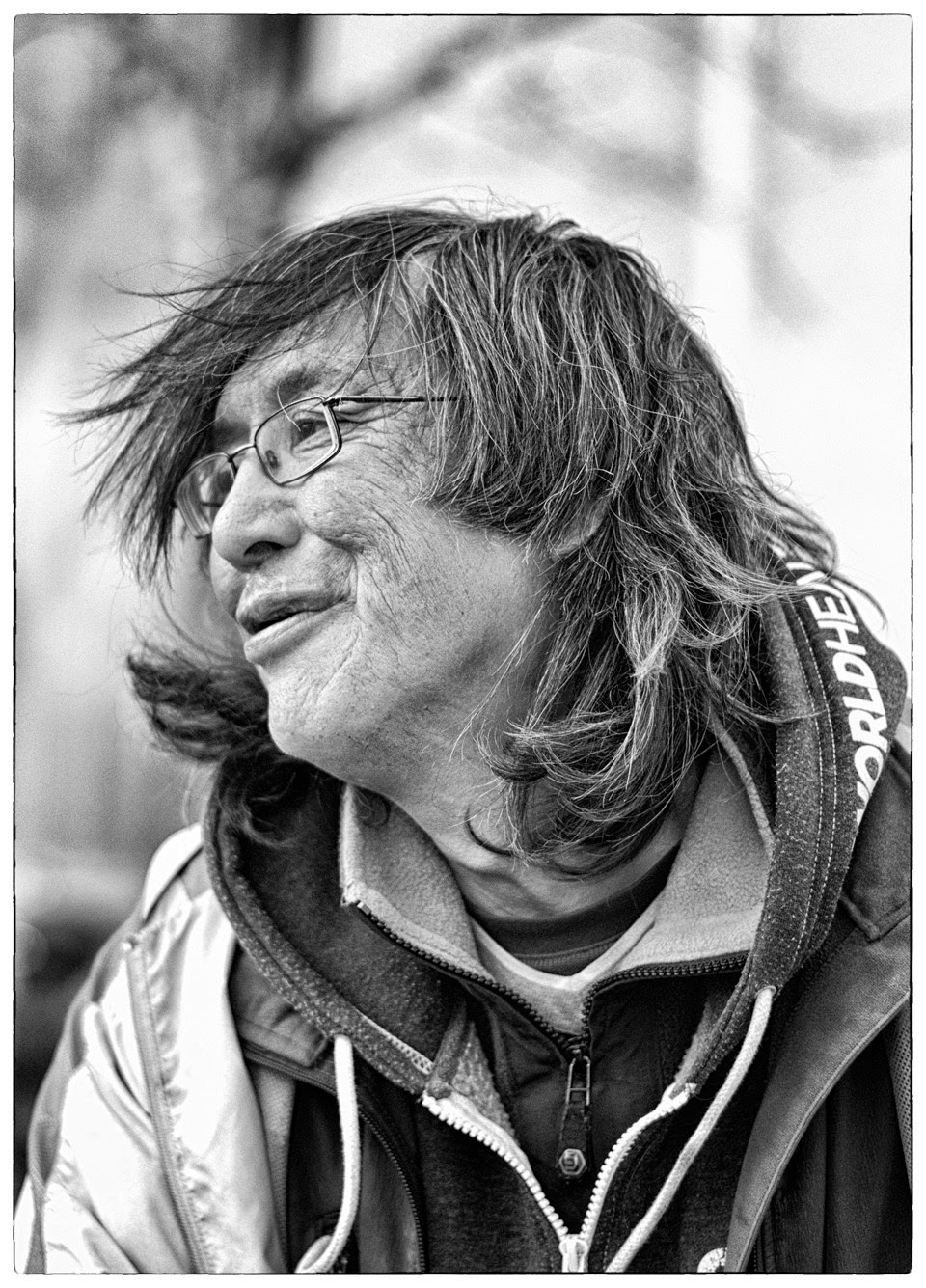 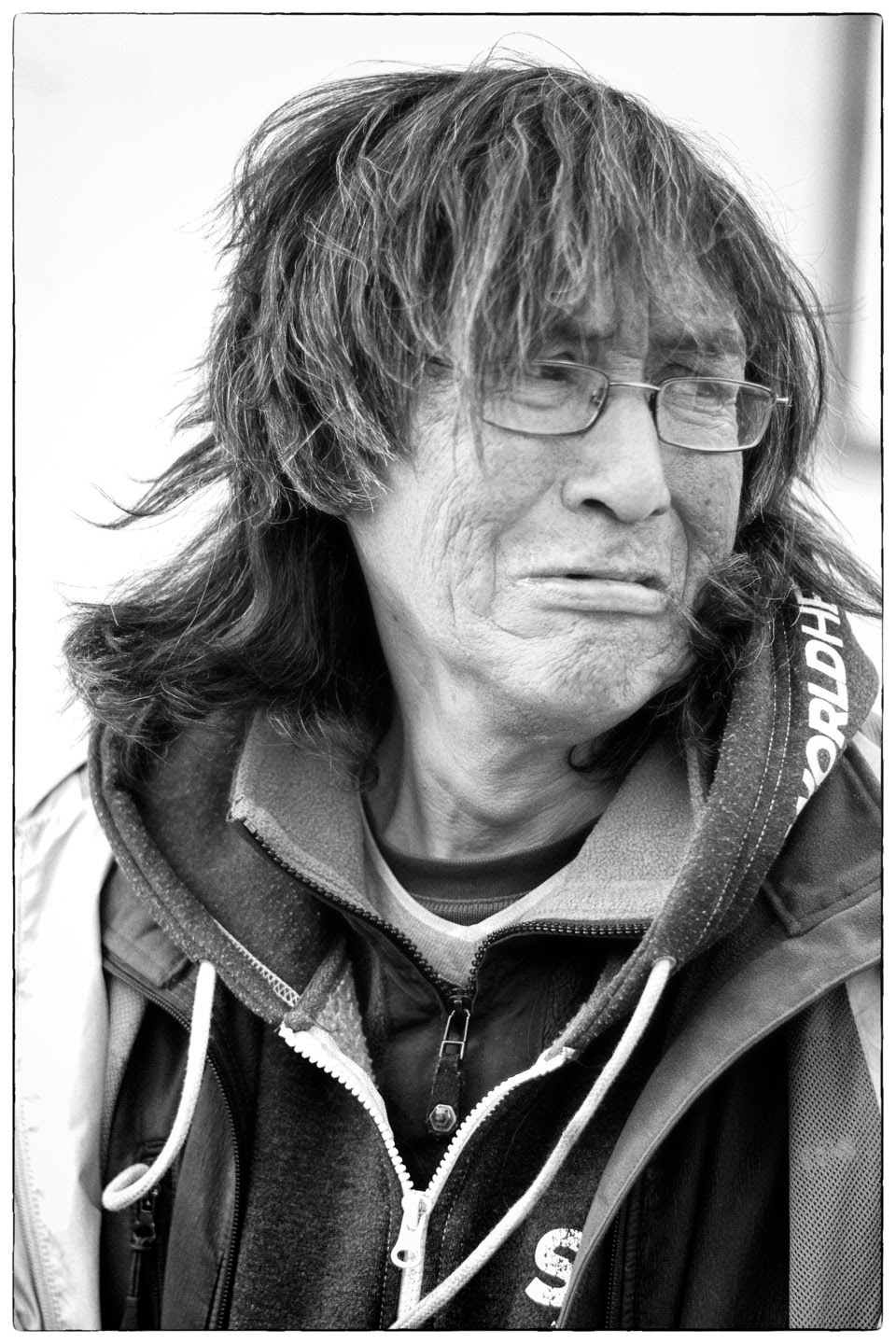 The thing is, I learned something from Tom and Christina.  I signed up for portrait classes to learn how to pose and to talk to people so that I could take the best photo of them.  After goofing with Christina and shooting with Tom I realized that maybe posing isn't important.  It's talking!  By joking with Christina and talking to Tom I got them to be themselves... which I think makes for the best portrait.
Posted by Wanda Martin at Wednesday, October 22, 2014 No comments: Links to this post

Over the weekend I helped a friend move some mementos.  The acreage she called home before she married has been sold. Some Buddhists bought it and will be tearing down all the buildings in the coming year.

While she explored the stable and sheds for her stuff (and old memories), I took a few photos.

These were all taken with the Canon PowerShot G15 and edited with Nik and Photoshop software.

A pigeon freaks out and tries to escape the old horse stable.  It eventually got out.

Charlie, a thirteen year old mix-breed, is extreme protective.  She pretty much barked the whole time we were there.  After a while everyone just ignores her.
Posted by Wanda Martin at Monday, October 13, 2014 No comments: Links to this post