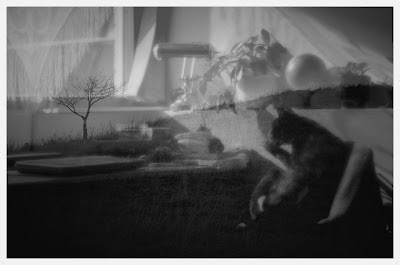 He who works with his hands is a laborer.

He who works with his hands and his head is a craftsman.

Posted by Wanda Martin at Tuesday, February 28, 2012 No comments: Links to this post 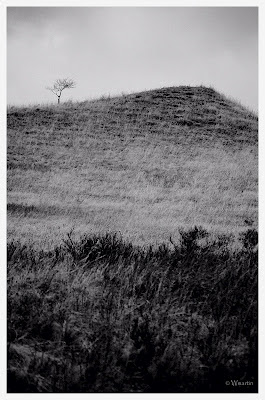 Whenever I take a course on anything, I usually do the Hermione Granger thing and over-research. Lately, I've been trolling YouTube for videos about fine art photographers. Today, I watched a series of clips about Richard Avedon, who is George Webber's inspiration. Webber is a local award winning and decorated documentary photographer who was speaking at the CPL Photography Club last Saturday morning. He was also one of my instructors at SAIT last summer. Webber dropped a few names, that I've yet to research, but he said the photographer that influenced him the most was Avedon.

This morning, in between laundry loads and instead of grocery shopping, I watched an Avedon biography called Darkness and Light. What struck me was even though he was a master photographer he was incredibly insecure about his photos. In one photo of a model posed with elephants, he moans that it's not a perfect photo because the sash on her dress doesn't flow to the left.

Makes me wonder, an amateur, if my own insecurities are justified. Sure, people say nice things about my photos, but my confidence is nibbled on by a little rat who points out that people tend to say only nice things on Flickr and the STP pages. Then the rat asks what the point is in my photos. Where am I going with any of this?

I'll get back to you, rat, when I have it figured out.

Posted by Wanda Martin at Tuesday, February 21, 2012 No comments: Links to this post 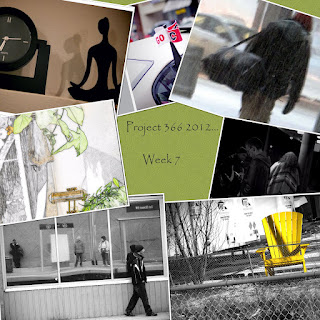 Day 43... February 12:
Pictures of People... While waiting for the C-Train that would take me to the next STP meetup, I noticed how the building across the street made picture frames around myself and the couple waiting next to me. Then this kid stopped in front to lean against the building. I moved way back, so the couple wouldn't see me and started taking shots. The kid spotted me and moved away to help create this photo of the day. I deliberately wanted myself in the photo, because as I was shooting Jack Johnson's song "Pictures of People Taking Pictures" was playing in my head.
Day 44... February 13:
Surprise Snow Storm... There were other, sharper photos of this fellow, but this one, with slight motion blur, seemed to best captured the unsettled feeling of today's sudden snow storm.
Day 45... February 14:
Time Out... Bypassing the whole Valentine's Day thing (it's a Capitalistic Ploy to make single people feel bad, I'm sure), plus feeling a little stressed from the week, I opted for simplicity and the first thing that grabbed my eye in my apartment, again.
Day 46... February 15:
Chillin'... Saw this guy dressed in shorts and a poncho at the SAIT C-Train platform the week before, but my train came too soon to take the shot. Saw him again tonight after photo class and caught him.
Day 47... February 16:
Hand Drawn... Even though the sun was shining and the wind was low, I didn't feel like leaving my apartment. Spent most of the day capturing the sun as it traveled around the place. Then I played with effects.
Day 48... February 17:
Big Yellow Chair... Another shot from a C-Train platform with the train arriving. The yellow was a Photoshop technique I learned last summer at SAIT's Fast Track Photography Certificate program.
Day 49... February 18:
Go Flames... Wandering around downtown looking for the photo of the day, found this one on my way home.
Posted by Wanda Martin at Tuesday, February 21, 2012 No comments: Links to this post 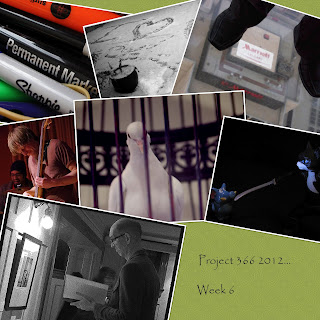 Day 36... February 5:
Floating... Stayed up until 2:30 am yesterday, investigating levitation photography on YouTube. Tonight, on a photo club outing to the top of the Calgary Tower, I caught a little floating action.
Day 37... February 6:
Sweet... Saw this on my way to work this morning. Even though it wasn't intended for me personally, it made my Monday morning a little bit sweeter. Had to do some major Photoshop clone editing on the bottom corner. The snow on that part of the sidewalk was actually shoveled clear.
Day 38... February 7:
Pens in My Desk Drawer... The cold winter wind kept me indoors (until I had to go to work), so I thought I'd take a shot of whatever was in my desk drawer. Totally sans effects.
Day 39... February 8:
The Photo Exhibit... February is Exposure Festival month where photography is celebrated with exhibits and workshops throughout the month of February. My Fine Arts Photography class went to George Webber's Sandstone City opening at the Lougheed House, then later went to see the photos exhibited at The Grand Theatre.
Day 40... February 9:
Art Central Dove... Spent Thursday afternoon blitzing the MOCA, Art Gallery of Calgary, Art Central and Glenbow Museum photo exhibits downtown. A pair of doves in an ornate cage at Art Central became the photo of the day.
Day 41... February 10:
Black History Month... February is also Black History Month and every year the Afrikadey people put on a What is Black History show at the Central Library. Even though I was scheduled to work the Library display table, my supervisor gave me free rein to take as many photos as I liked.
Day 42... February 11:
Bad Kitty... Every so often my friend and I go to Value Village to de-stress. I picked up a bag of toys for $2 and composed this. Stacey Watson, my Fine Arts Photography teacher, says that all photos are autobiographical. So, I feel some concern about what a dominating female kitty with a sword to a little pig's throat might say about me.
Posted by Wanda Martin at Tuesday, February 21, 2012 No comments: Links to this post 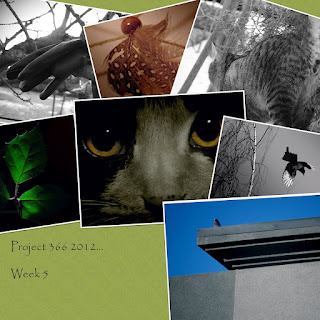 Day 29... January 29:
The Tormentor... Since moving into my new apartment in November, my cat has been having severe anxiety attacks. She grooms herself like she's possessed; flipping around on the floor, eyes crazed. I've suspected the cause of her distress was another cat lurking around. Today I spotted her tormentor.
Day 30... January 30:
Park Lost & Found... Less than inspiring day.
Day 31... January 31:
"Super intense"... was one of my Flickr contacts response to Kit's mojo stare.
Day 32... February 1:
Sunlit Ivy... Sometimes it's the little things like sunlight lit ivy leaves that make my day.
Day 33... February 2:
Magpies in Flight... while anticipating the move of one magpie, a second maggie made this the shot of the day. Super lucky.
Day 34... February 3:
Dream Catcher Feather... low on ideas again and short of time.
Day 35... February 4:
Pigeon on Rooftop... spotted this from across the street while waiting for a bus. Had to do some major cropping. What caught my eye was the contrast between this weak defiant-looking little bird and the strong lines of the building's roof.
Posted by Wanda Martin at Tuesday, February 21, 2012 No comments: Links to this post 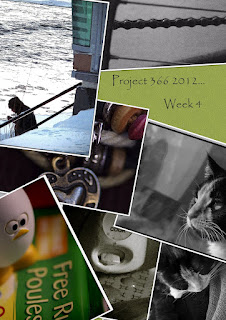 Day 22 ... January 22:
Alter Ego... a reflection of a self, both real and not. Kit scanning the yard for squirrel, birds and other cats.
Day 23 ... January 23:
Private Puff. There's a spot in the newly designed River Front Park that a person (or maybe more than one) claims as their place for a private puff of their favorite weed. At least they think it's private. Usually I can smell their weed well before or after spotting them.
Day 24... January 24:
Free Run, Run Free. It's late in the day and I haven't taken my photo of the day, yet. I opened the fridge for a snack and thought "what if my little egg whisk guy tried to liberate a carton of eggs?" The Flickr caption for this was: "Hebert always wanted to be a hero..."
Day 25.... January 25:
A Bracelet... What more can be said? Again short on shots, so I took some of my favorite bracelet, given to me by my best friend. We've been together for over half my lifetime. Longer than my two marriages (official and un).
Day 26... January 26:
Simply Kit... When I'm sitting in Kit's chair, she compromises by sleeping on top of the chair's throw pillow. Today I decided to give the effect filters a rest and create something simple.
Day 27... January 27:
Spoke & Chain... Been eyeing how my bike looks lit up by only a hallway nightlight. Started a Fine Arts Photography class at ACAD last night. The last couple of days I've also been watching videos on master fine art photographers. Thought I would try to get a vintage photo effect by jacking-up my camera's ISO to the max. This was shot at ISO 51,200. Light source was a dim nightlight and late afternoon overcast sunlight from a distant window. In camera, I changed it to b&w and added the retro filter.
Day 28... January 28:
Tried to cook Red River cereal in a rice cooker while experimenting with ISO 51,200. One worked.
Posted by Wanda Martin at Sunday, February 12, 2012 No comments: Links to this post