January - a month of squirrels 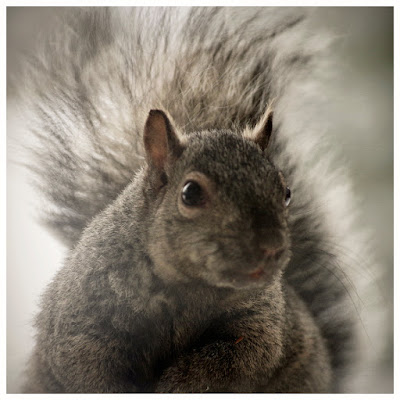 At the beginning of January I set out a bird feeder full of peanuts, originally for wild birds, but the squirrels have claimed it as their own.  They can quickly remove the lid from the feeder and swing upside down and sideways plucking out the nuts. After I froze one afternoon trying to find the lid in the snow, I decided to tie it to the feeder with plastic computer cable wraps.

I've tried to distract the varmints from the bird feeder by setting aside their own little metal dish full of peanuts. The dish is set in a plant pot full of dirt to keep it in place by my window. (Great photo ops.)  However, the squirrels like both feeders and now I have two or more squirrels at once stealing peanuts.

Now the squirrels are getting even bolder.  I can hear when they're in the bird feeder because it rattles from their weight, but yesterday afternoon I heard a metal rapping on concrete noise.

When I peered out the window I saw that a little black squirrel had removed the metal dish from the plant pot. It was grabbing the edge of the dish with its teeth and deliberately lifting and dropping  the empty dish on the concrete pad as if to say, "The dish is empty, fill it!"

It's tricky getting the little guys in focus, what with the moving and the low light.  Without sufficient contrast of light, auto-focus doesn't work quickly enough. So, I manually focused, mostly on their eyes, but often it was an ear or chest fur or the birdfeeder that was caught in focus. I also tried continuous shutter release, but just got more out of focus photos. Here are a few shots that worked (sort-of). [Click on the image to see bigger photos.] 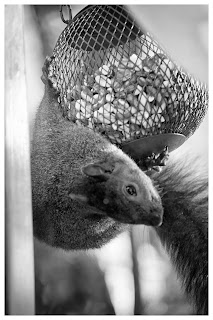 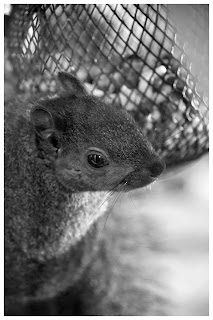 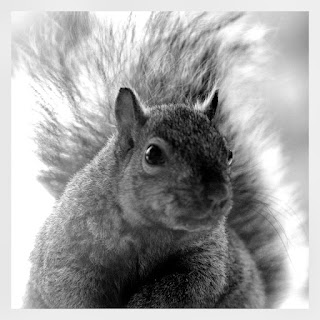 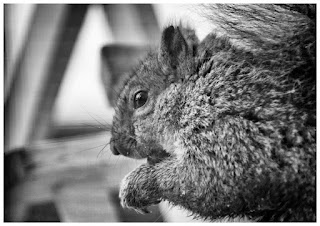 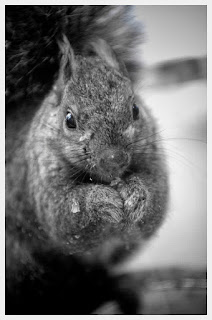 The squirrels figured out that they could chew the plastic ties I was using to keep the feeder lid on.  So, I tried again.  I attached two tiny padlocks and a dog collar chain bought for $3 at the dollar store. It slows the little critters down. Now a feeder that they could empty in one afternoon takes a little longer.  The squirrels are not happy. lol 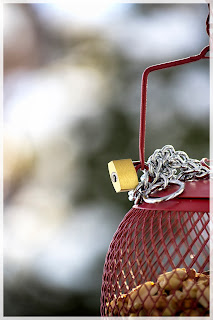 Posted by Wanda Martin Photography at Wednesday, January 31, 2018 No comments: Links to this post